How Does Bankruptcy Work in California for Chapter 7, 11, and 13? 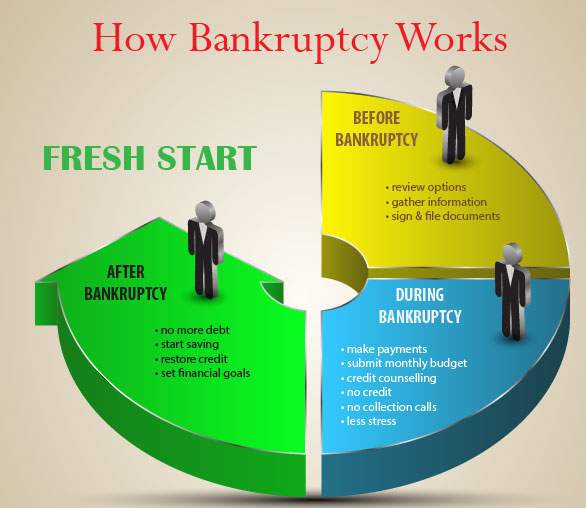 What exactly is bankruptcy? People often refer to having no money as “being bankrupt”.

But that is not bankruptcy.

Bankruptcy is a set of laws designed for individuals and businesses (and also railroads and cities) who are unable to pay all their debts when due.

What Do Bankruptcy Laws Do?

The big picture:  Bankruptcy law is designed to alleviate obligations of debtors (those who owe money) balanced with the rights of creditors (those to whom money is owed) to maximize their recovery.

In the old days of debtor’s prisons, people who owed money would be jailed and their property seized.  They would remain in jail until they paid their debts in full somehow.  I don’t believe this ever occurred in California, but it did happen in Colonial states.

It took society a while to figure out, however, that it was difficult for people who were in jail to earn money to pay off their debts.

This was the definition of a “lose-lose” proposition.

People put in jail no longer contributed anything to society (did not buy goods and services).

And those who were owed money did not receive anything other than whatever assets the debtors had.

Today’s bankruptcy laws are a balancing act between the need of debtors for a fresh start, and  creditors’ rights to be paid.

When a bankruptcy case is filed, a federal injunction immediately and automatically goes into effect prohibiting any and all collection actions by creditors.  Violation of this injunction can result in substantial fines and penalties for damages and contempt of court.  The automatic stay continues until the discharge is entered or the case is closed, or by separate order of the bankruptcy court.

Creditors can seek “relief” from the automatic stay if certain criteria are met.  For example, in a Chapter 13 case if there is no equity in a piece of real estate and the debtor is not making their required monthly mortgage/secured debt payments, the bank secured by the property can seek permission from the bankruptcy court to proceed (or to commence) with a foreclosure on the property.

Bankruptcy is broken down into different Chapters of the United States Bankruptcy Code.

The main Chapters for individuals and corporations are Chapters 7, 11, and 13.  There are other Chapters for railroads, municipalities and foreign insolvency proceedings, but they will not be examined here.

Not all debts are dischargeable in bankruptcy.  Congress has excluded many debts from discharge, such as domestic support obligations, some tax obligations less than 3 years old, student loans and others.  Some debts are dischargeable unless the creditor takes action to object to them by a deadline in the bankruptcy case.  These include debts incurred through fraud, willful and malicious damage to property, breach of fiduciary duty and others.  See  Which Debts Are Dischargeable In Bankruptcy?  for information on debt discharge in bankruptcy.

The basic concept in Chapter 7 is that the debtor filing bankruptcy simply does not have enough income or assets with which to pay their debts.  Thus, if one qualifies for Chapter 7, they do not have to make any payments and they get rid of all dischargeable debts.
The trade-off is that in Chapter 7 you give up any non-exempt assets or, property, that you own or to which you own the rights.

Exemptions are protections for value of assets owned.  For example, if you lived in California for the last 2 years and filed a Chapter 7 case, and you are under 65 and not married, you can exempt up to $75,000 of the equity in your home.

Every state has different exemption laws that protect different assets in differing amounts.  Which state’s (or federal) exemption law applies in a case depends on where the debtor has resided for the 2.5 years prior to filing the case. See More on Exemptions

Chapter 7 eligibility for those with primarily consumer debts  is complex.  It requires “passing” a means test, which uses gross income received in the 6 calendar months prior to filing the bankruptcy case, and deducting IRS allowed expenses (and some actual expenses) to determine if you meet the threshold somewhat arbitrarily dictated by Congress.   If you do “pass” the means test, you also have to get past another income/expense test using your actual current income and expenses.

Chapter 13 is a repayment plan for individuals done over 36-60 months.  The length depends on need and income received in the 6 months prior to filing the case.

You get to keep all your assets/property in a Chapter 13.  However, you must pay out to unsecured creditors at least as much as they would have gotten if your case was filed under Chapter 7.

The repayment can be anywhere from 0% to 100% of unsecured debts, depending on:

Chapter 13 has debt limitations. In order to use Chapter 13, you must have less than $2,750,000 of total debt.  (This is the new limit until June 2024, at which time it returns to $465,275 of noncontingent, liquidated unsecured debt and less than $1,395,875 in noncontingent, liquidated, secured debt).  These amounts are adjusted periodically, so check with us to find out the current limits.

You must also have sufficient income to make the necessary payments depending on the asset values and types of debts that need to be paid.

Chapter 11 is a more involved version of Chapter 13.  Anyone can file a Chapter 11 case (business or individual).  There are many differences between Chapter 11 and Chapter 13, but a few significant ones are:

A. In Chapter 11, creditors get to vote on the proposed plan (except in the newly created “small business case” subchapter) and enough votes in each class must be obtained in order for the plan to be approved (confirmed).

B.  If enough votes are not received, you may be required to pay 100% of all debts over time or contribute “new value” to the plan.

C.  There are monthly reporting requirements and quarterly fees which must be paid to the US Trustee.

Should You File Bankruptcy And If So, Which Chapter?

Bankruptcy is a powerful tool and an important right set forth in The Constitution.   There are many factors to examine when deciding whether you should file bankruptcy and which Chapter under which to file.  This can really only be determined after having a comprehensive consultation with a qualified and experienced bankruptcy attorney in your area.

So, STEP 1 is to consult with a bankruptcy attorney.