Do You Have To Be a Citizen To File Bankruptcy? 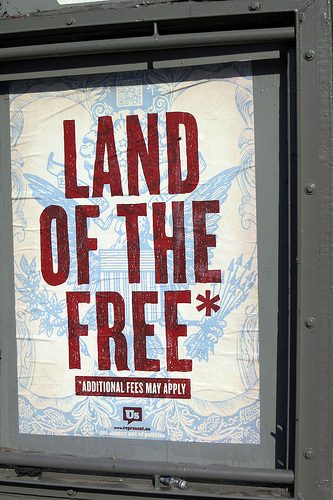 Land of the Free,  Home of the Debtors.

Bankruptcy laws have provided relief in some form or another to those in debt for most of the history of the United States.

Bankruptcy is a very powerful tool and can be used to overcome a mountain of debts, often without giving up any assets.

But is bankruptcy limited to those fortunate enough to be actual citizens of the United States, or can anyone join in the fun?

Non-Citizens and Aliens Have Debts Too

You came to the United States, perhaps, to get an education.

Or possibly you are visiting friends or relatives and thinking of immigrating.**

Sometimes non-citizens get themselves into debt problems, just like citizens do.

For example, let’s say you enter into a business deal with someone that turns sour.   Or, you inadvertently (negligently) damage someone’s property.  Or, you get a credit card or two, and become unable to pay.  Or, you get into an accident and have to be treated at a hospital but can’t pay all the bills.

What can you do?

Staying or Leaving the United States?

Well, if you’re not a citizen and leaving the country soon and not planning on returning, and you don’t have assets located in the United States, you probably don’t need to do much.

It is unlikely that your creditors in the United States will pursue your income and assets in other countries.  It would be expensive to do so, and would also require that the country you’re living in have a specific agreement with the United States allowing U.S. creditors rights to recover against that country’s citizens.

But many non-citizens who incur debts in the United States are planning on staying.  They want to get jobs here and, perhaps, eventually become citizens.  Some may have assets here already.

And they face the same problems as anyone else who owes debts:  their wages can be garnished, assets levied, bank account seized, and liens put against their property.

Non-Citizens Can File Bankruptcy in the USA

Filing bankruptcy is a great way to eliminate debt problems, including those referenced above. [pullquote]Filing Bankruptcy If Outside Of USA[/pullquote]

It would seem to make sense that one would need to be a citizen to take advantage of the bankruptcy laws in the United States.

But here’s the truth on this issue:

There is no citizenship requirement to file bankruptcy.

In fact, pursuant to Section 109(a) of the Bankruptcy Code, the only prerequisite to filing bankruptcy in the United States is that you are a person and either reside, have a domicile, place of business, or property in the United States.   The term “person” also includes corporations and partnerships, as well as individuals.

It can be just as beneficial for a non-citizen to file bankruptcy as for a citizen, so you might as well take advantage of the laws that work in your favor (God knows there are enough laws that don’t).

As the say in the American Express commercial, “citizenship has its rewards.”

Apparently, so does non-citizenship.

**Please note that if you are immigrating to the United States, filing bankruptcy can sometimes affect your status.  You should discuss this with an immigration attorney before filing any bankruptcy case.