Why You Should File Bankruptcy While Unemployed 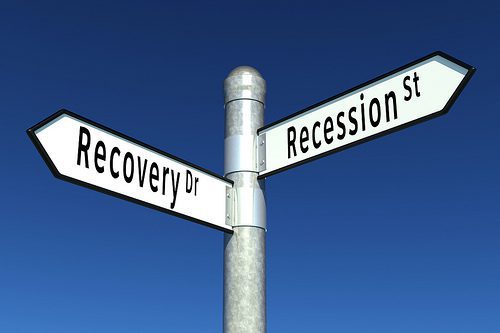 How is the recession affecting you?

According to a recent article shared on billmoyers.com we are in the middle of the longest recession since the Great Depression of the 1930s.

What’s really surprising is that, according to that article, only 10% of those unemployed persons filed for bankruptcy.

Is this a good time for them to file bankruptcy?

It can also occur from the supply side when things people need (such as gasoline, for example) become less available (more scarce).

What causes demand to drop?

People stop spending money on things when they can’t afford them.   Thus, if you are unemployed, you’re not going to buy that new car, or toaster oven, or iPad.

This has the effect of causing more unemployment as employers lay off workers due to the lack of demand.

Bankruptcy isn’t going to stop a recession.  But it can speed up the recovery.

Bankruptcy does this in a number of ways, but primarily it eliminates the obligation to pay on certain debts leaving the individual more able to purchase items once they get back on their financial feet.

This in turn stimulates the economy, which in turn decreases unemployment as employers start hiring again, etc.  Failing to do so can prolong and perpetuate the problems.

This does not mean that filing bankruptcy is going to create income.

I wish that were the case.

But filing bankruptcy enables the economy to recover much more quickly from a recession.

Let’s say you do not file bankruptcy, but do what the 90% of those in the above article did.

Once they get a job, it may or may not be at an income level sufficient to meet all their debt burdens.

So, instead of having a fresh start and contributing to their personal economic growth as well as the nation’s, they remain stuck in a vicious cycle of trying to deal with debts they had before they became unemployed.

Had they filed bankruptcy and eliminated their debts sooner, they would be debt-free (or at least have less debt) and now be in a position to either save money, or put more back into the economy by purchasing goods and services.

Chapter 7 bankruptcy allows debts to be wiped out without any payment to creditors.

The catch is that you can’t have too much income in order to be eligible.

If you had really high income before you became unemployed, and that was within the past 6 months, then you may not be able to file Chapter 7 for a little while, due to the means test (an experienced bankruptcy attorney can determine this).

But there will come a time when you will be “ripe” for filing a Chapter 7 case either during your unemployment, or possibly shortly after you regain employment.

This is your chance.

Wait too long, and you may end up earning too much income to file a Chapter 7 case, but not enough to be able to pay your creditors (if that’s the case, you always have the option of filing a Chapter 13 or Chapter 11 case and doing a repayment plan, but Chapter 7 is a lot easier and less expensive).

How Can I Afford to File Bankruptcy While Unemployed?

This is always a dilemma for people in financial distress.

Many don’t “save for a rainy day.”

Considering Bankruptcy Should Be a Priority When Unemployed

You need to prioritize things.

I’m not saying bankruptcy should be at the top of your list above putting food on the table and clothes on your children.

But it shouldn’t be at the bottom of your list either.

This is NOT a good time to hire cheap, inexperienced bankruptcy counsel or try to represent yourself in bankruptcy.   Doing so may leave you in a much worse position than you’re in now, and take much longer to recover from.  See more.

You need to plan for the future, especially when things look bleakest.

Your personal recovery,  just like the country’s, depends on your ability to do more than just pay for essentials once you regain employment.

Getting rid of your burdensome debts is an important and necessary step in that direction.