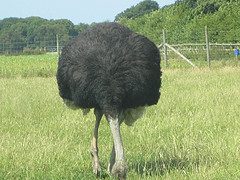 In today’s Los Angeles Times, there is a featured story about a dentist, Opanin Gyaami,  still working at age 70 to pay off student loan debt of over $500,000.    He didn’t take out $500,000 in loans, of course.   No, his original principal loan balance was only $50,000, but he repeatedly ignored late notices from the government when he missed payments, so interest and penalties accrued until now he owes more than he will ever pay off.   Moreover, since he apparently let this go to the point where he could not take the loans out of default, he greatly limited his options in terms of consolidation and other programs for repayment

You Are Not Alone

Many people feel overwhelmed with their bills,–not just student loans, but also credit cards, medical, taxes, and so on.  That is understandable.  But being an ostrich and sticking your head in the sand is not going to help you or your creditors.

Dr. Gyaami at one point likely had several options available to him that could have enabled him to take his student loans out of default and then utilize any number of programs, such as an income-contingent or income based repayment plan, which can result in ultimately paying less than 100% of the debt owed.  Bankruptcy was another option he could have considered, although that would required him to prove “undue hardship” which is very difficult.

But the point of this blog isn’t just how to discharge student loans inside or outside of bankruptcy.  It is about taking action, being proactive  and learning your options and alternatives when problems arise–not 10 years later.   This doesn’t just apply to financial woes.  I’ve written before about ignoring financial problems being similar to not treating Cancer (see my article on the dangers of waiting too long to file bankruptcy) , but it’s no different than treating a medical problem early before it becomes fatal.   Bankruptcy is an option that can, often times quite painlessly, resolve financial Cancer if done timely.  But regardless of what your best option is, it is important to learn and explore all your options rather than ignoring things like Dr. Gyaami apparently did.

Seek out the best sources of information for your problem.  For financial problems, start with an accountant or a bankruptcy attorney.   Perhaps your best option will be simple negotiation with your creditors.  Maybe debt consolidation will be the best thing.   Or, perhaps bankruptcy.   Seeing someone to get information doesn’t obligate you to do anything, anymore than seeing a medical doctor requires you to have surgery.   But you can’t make an informed decision without good information, and ignoring things will at the very least limit your options in the future, if not eliminate them altogether.