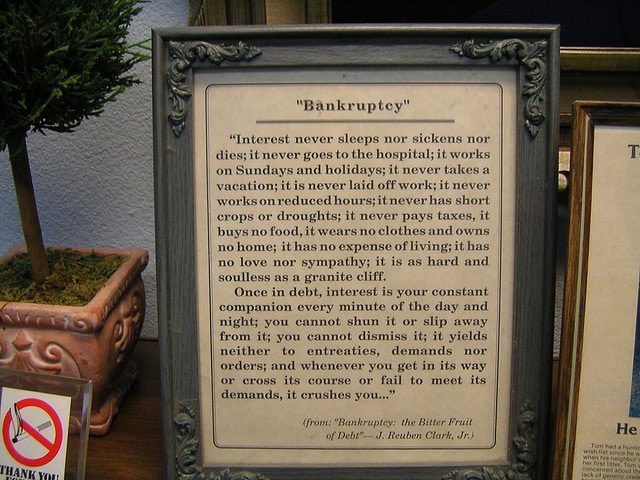 I’ve been saying it for years:  It will cost you more money in the long run to not use an attorney for bankruptcy (or for using a bad attorney) than it will to hire a competent one at the outset.

Now there is impartial, empirical evidence to support this.

Bankruptcy Is Not A “Do-It-Yourself” Project

You all know a guy who thinks he can fix anything in the house.

Like plumbing, or electrical.  Even though he has no experience or training with either.

But he’s a DIY kind-of-guy.

Next thing you know, the house is flooded or a fire has burned down half the house, and you have to spend large amounts of money to hire the professionals that should have been hired in the first place.

That is bankruptcy representation in a nutshell.

Many think they can do it themselves.  Like the optimistic layman plumber, you may get lucky and stop the leak without causing more problems.  But what if you don’t?

I have seen how wrong self-filed cases can go.  Seeing people lose their homes unnecessarily or failing to eliminate the debts they filed bankruptcy to deal with.

Filing bankruptcy can affect those close to you.  For example if you have repaid loans to relatives in the past year or transferred property to someone in the recent past.

Or if you’re a joint account holder with someone.

Trust me.  After doing this since 1991 I can tell you that whatever money you perceive you are saving from filing without an attorney is not worth it.

Don’t believe me?  How about actual statistics from the United States Bankruptcy Court?

The the annual “pro se report” (pdf) issued by the United States Bankruptcy Court for the Central District of California (primarily the Greater Los Angeles Area) consistently finds that debtors who represent themselves pro se (without an attorney) have a significantly lower success rate than those who use attorneys.  This is true for any bankruptcy chapter filed, but even more so for Chapter 13.

Chapter 13 is used to, among other things,  stop foreclosures by catching up on past due mortgage payments over a period of time; removing junior liens against real estate, and/or doing a repayment plans–at 0% to 100% depending on circumstances–of one’s debts.

In Chapter 13 cases the success rate (leading to a confirmed repayment plan)  was less than two percent for those not represented by an attorney versus over 60% with an attorney.

The corrected numbers did not change the conclusion drawn in previous reports, which is still that an extremely small percentage of the self-represented chapter 13 filings reach plan confirmation (Figure 10). This abysmal success rate continues every year, illustrating why representing oneself in chapter 13 is either a mistake or a tactical decision. As the attorney fee can be paid through the plan over three to five years, any debtor that is seriously seeking the advantages of chapter 13 should consult a chapter 13 attorney. Instead, over the peak filing years between 2009 and 2013, such as in 2011, the number of pro se filings hovered around half of chapter 13 filings.”

It is important to also consider that failing to get a discharge is not the only problem that can result from filing without being represented by an attorney.

In some cases, the denial of discharge may be permanent, preventing the filing of a future bankruptcy case to eliminate the debts; or, there may be other negative consequences in a subsequently filed case, such as not receiving the protection of the automatic stay during the case.

Also, while representation by an attorney does not guarantee success 100% of the time, in Los Angeles, California or anywhere  (in many of those cases that don’t succeed, particularly in Chapter 13, the reason is the failure of the client/debtor to make the required payments to the court trustee), it clearly gives one the best chances of success and, as can be seen above, the chance for success in a Chapter 13 case is practically zero without an attorney.

The report states that “common problems in self-represented debtors’ cases include:

Self-represented creditors are often harmed by not filing a proof of claim in time, by missing the deadline to file a dischargeability action, and having difficulty filing an objection to a claim.”

The report also takes aim at “bankruptcy petition preparers”, who are people or agencies that simply fill out forms, but are not attorneys and strictly prohibited from giving any legal advice .   It points out that “[t]hough some BPPs in the district get good results for debtors, some practice outright fraud.”

There has never been more clear actual evidence of the need for competent legal counsel.   Whether you are filing Chapter 7, Chapter 13, Chapter 11 or are a creditor dealing with a debtor who has filed bankruptcy, you need an attorney.  The risk of significant problems when representing yourself is very high compared to using an experienced bankruptcy attorney.