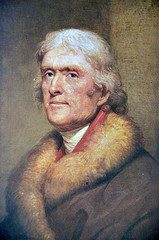 There is no shame in seeking bankruptcy relief and protection.  The only shame is waiting too long.

Many Feel Guilty About Filing Bankruptcy

Over the years one of the most commonly repeated statements I hear from my clients is how they feel guilty or ashamed that they have gotten themselves into their current position.

Even after I explain to them that the credit card companies whose debts they are trying to discharge will likely be just fine financially after my client files bankruptcy, their moral compass still tells them there is something wrong.

Even when I explain that Congress created the bankruptcy laws so that, on the whole, both sides benefit (debtors, creditors and society as a whole), that still doesn’t seem to assuage the guilt

Then I mention how some of the most brilliant and successful people in our history filed bankruptcy, their ears perk up.   One of my favorite such historical figures is Thomas Jefferson.

Thomas Jefferson (for those of you don’t know him) was the third president of the United States.   He was a statesman, diplomat, architect, author, inventor and farmer.   He is widely regarded as a genius and perhaps the smartest of all United States presidents.   He wrote the Declaration of Independence.  He was a man who gave vision to this country as one of its founding forefathers and leader of this country.

Why do I bring up Mr. Jefferson? Because he was almost constantly in debt.  BIG debt.  Mr. Jefferson filed several bankruptcies in his lifetime; and his debt was huge in comparison to most individuals’ bankruptcies today.

A Chapter 7 Trustee here in the Central District of California, the late Steven E. Smith, used to start his debtors’ examinations by discussing Mr. Jefferson and those similarly situated.  It was a very pleasant way to start what is a stressful and often embarrassing day in the lives of my clients.

Needing Bankruptcy Is Not A Reflection Of Your Wisdom

People need to file bankruptcy for many reasons  that have nothing to do with brains, moral character, or even financial management abilities.

Our bankruptcy laws exist for a reason.   Why would you not take advantage of a law that is available to you?

Bankruptcy laws benefit society as a whole.  They allow the typical “honest, but unfortunate” debtor to be relieved from debt burdens.  This enables them to be more productive in society. It also has protections for creditors, by requiring payment of non-exempt assets and, if the debtor can afford it, some sort of payments (in a Chapter 13 or Chapter 11 case)

Bankruptcy law does not allow people acting in bad faith to discharge their debts.  For example, you cannot run up credit card debt without the intent to pay it and get a discharge of the debt in bankruptcy.

Filing Bankruptcy Is An Act Of Responsibility

If a person with Mr. Jefferson’s credentials, aptitude and intelligence can repeatedly get himself into situations that require bankruptcy to solve, then it is certainly not a negative reflection on you if you need to.

The bankruptcy laws are here to serve a definite purpose that benefits everyone on the whole.    It is of course important to be responsible for the debts you incur, but filing a bankruptcy is an act of responsibility. It puts you in a position to move forward, to become productive once again, provides closure, and pays your creditors from your non-exempt assets in a Chapter 7 straight bankruptcy case (or by other means if the court so approves in a Chapter 13 bk case or chapter 11 reorganization context).

See my article on Filing bankruptcy as a last resort.

It is important not to wait too long to seek advice on bankruptcy.  As I explored in a different article, it should not be a last resort.

It is important to explore bankruptcy as an option instead  of attempting to struggle for years to no avail.  There are many factors to consider before filing a bankruptcy, but one of them should not be a guilty conscience.